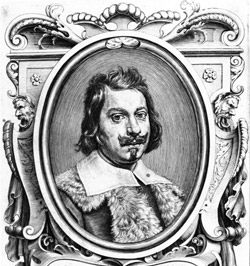 Evangelista Torricelli (October 15, 1608 – October 25, 1647) was an Italian physicist and mathematician, best known for his invention of the barometer.

Torricelli's chief invention was the barometer, which arose from solving an important practical problem. Pumpmakers of the Grand Duke of Tuscany attempted to raise water to a height of 12 meters or more, but found that 10 meters was the limit to which it would rise in the suction pump. Torricelli thought to employ mercury, fourteen times as heavy as water.

In 1643 he created a tube c. 1 meter long, sealed at the top end, filled it with mercury, and set it vertically into a basin of mercury. The column of mercury fell to about 76cm, leaving a Torricellian vacuum above. As we now know, the column's height fluctuated with changing atmospheric pressure; this was the first barometer. This discovery has perpetuated his fame, and the torr, a unit of pressure, was named in his honor.

Torricelli also discovered Torricelli's Law, regarding the speed of a fluid flowing out of an opening, which was later shown to be a particular case of Bernoulli's principle.